It’s critical that any suspected hand infection be treated early and aggressively.  If caught early, many of these infections require only simple treatments.

There are many types of hand infections that are commonly seen.  Below are descriptions of the causes, symptoms and suggested treatments of several of the most common infections.

An infection that affects the nail/cuticle area, acute paronychia is caused by bacteria and results in redness, swelling, pain and pus.  If you catch it early, it can be treated by soaking or antibiotics.  However, once pus is seen, it’s also necessary to have the area drained.  Chronic paronychia, on the other hand, is fungal.  What results is more mild redness and swelling, with little or no pus.  This is a common affliction of people whose hands are frequently wet, such as bartenders.  Another common cause is the use of acrylic nails, which can be a breeding ground for bacteria.  Medication and reduction of moisture exposure can successfully treat the infection.  Surgery is only occasionally needed to remove infected tissue. 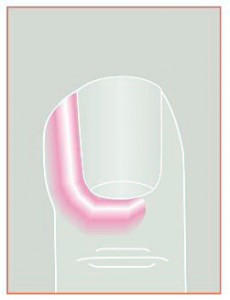 Felon is a serious and often painful, throbbing infection.  It usually occurs in the closed spaces around the fatty tissues in the fingertips.  Surgical drainage and antibiotics are needed to treat this infection.  The soft tissues and bone can be destroyed if treatment is not sought early.

This is a viral infection that is caused by a herpes virus and usually presents on the fingers.  It’s most commonly seen in healthcare workers whose hands have been exposed to the herpes-infected saliva of patients.  The signs are small, swollen, painful blisters.  Treatment is conservative and usually resolves within a few weeks.

This joint infection is caused by a wound in or near a joint, or by an arthritic joint cyst that is draining.  If not treated, bacteria can destroy the joint in just a couple of days by eroding the cartilage surface.  Both antibiotics and surgical draining are required.  If that treatment is not applied quickly, the bone can also become infected.  The resulting complication is called osteomyelitis and generally necessitates surgery and weeks of intravenous antibiotics.

The spaces between layers of hand structure can get infected from even a small puncture wound.  These infections most often affect the thumb, the palm, or the area between the bases of the fingers.  Surgical drainage is needed.  Close monitoring is advised as the infection can sometimes spread to the wrist and forearm.

When there is a small laceration or puncture in the middle of the underside of a finger, near the joint, a flexor tendon infection can occur.  What often results is severe stiffness and sometimes even the destruction or rupture of a tendon.  Infected patients may notice that their finger is stiffened into a bent position, or that there is swelling, redness, tenderness on the palm side of the finger and a significant increase of pain if flexing is attempted.  Immediate drainage is required.  This could result in the loss of the infected finger in patients with diabetes.

A tendon sheath infection (described above) may be the result of an atypical mycobacterium.  The development is gradual and might also be accompanied by swelling and stiffness, but without the pain and redness normally associated with tendon sheath infections.  Special antibiotics are prescribed for several months to treat this infection.  Patients commonly experience some stiffness even after treatment.  Mycobacterium marinum is form of the infection that is caused by wounds from fish spines or by a simple wound becoming contaminated by natural or aquarium water.  Patients who have weakened immune systems (cancer patients, AIDS patients, diabetics) have a higher risk of infection.

Human or animal bites can cause several types of bacterial infections.  Streptococcus and Staphlococcus might be involved, but other mouth organisms are sometimes seen and require different treatments.  Human bite injuries often occur because of Eikenella corrodens, while dog and cat bites involve Pasteurella mutocida.  All of the infection must drain out, so wounds are left open after initial treatment.  The infected tissues is often surgically trimmed.  Although infection from a rabies-infected animal can be very serious, human contraction of rabies is very rare.  Rabies is most often carried by wild animals, with whom most humans have little or no contact.

Even after the initial infection has been resolved, hand infections have been known to cause severe, persistent problems such as decrease of strength, stiffness or even loss of tissue and bone.  Therefore, it’s critical that any suspected hand infection be treated early and aggressively.  If caught early, many of these infections require only simple treatments like antibiotics, rest and elevation.  When infections aren’t treated immediately, however, they can lead to serious complications that require more invasive treatments and long-term effects.